It has become quite common to use 3D printing to produce low-volume or experimental plastic components. However, this is mostly limited to lower-grade plastics or test parts, which are later going to be injection molded when they go into production. Components made of engineering-grade polymers, such as PEEK, are generally only produced using injection molding – despite the high tooling costs and inflexibility of the process, the demands on density and crystallinity always required the use of more ‘traditional’ methods. But despite their head start, our technology is quickly catching up!

One of the main topics in the world of 3D printing is inter-layer bonding. When the different layers of a print are not bonded together properly, the resulting product is not nearly as strong as it should be. In fact, even if the interlayer bonding is considered to be good, a 3D print is typically less resistant to tension perpendicular to the layers as it is along parallel to the layers, simply because the previous layer cooled too much before depositing the new material. This is one of the reasons why injection molding achieves a much more consistent result – there is no separation between layers, creating a uniform material in the finished part. This is the case for ‘basic’ polymers such as PLA or ABS, but even more so for more complex materials such as PEEK.

This was one of the first issues we’ve identified as being key to the success of printing in engineering-grade polymers such as PEEK. Using our patent-pending technology, we have now been able to overcome this problem using our new printers. During a fracture test, this part did not separate along the layers, but failed similarly to an injection-molded PEEK part!

Fig.n°1 - This broken section shows no separation between the layers.

Most materials used in 3D printing are amorphous, making them easy to work with, but have a number of disadvantages in harsh environments. This group of materials gradually becomes softer and more pliable with a rise in temperature before fully melting, and generally has a low resistance against chemicals and stress. Some materials, however, can form crystalline structures under the right circumstances, which makes them much more suitable for harsh environments. When a material has a high amount of crystallinity, it is more stable up to its actual melting point, thus it can withstand chemicals and higher stresses.

If a crystalline structure is required in the end result, 3D printing is usually off the table. Crystallizing a material usually requires a very slow cooling process, which is easy to do when the material is packed into a metal mold – when it’s free-standing in a printer, however, this is much more difficult. Due to Orion's patent-pending thermal radiation technology, our printing process is superior in creating crystalline PEEK prints even across layers.  In tests performed with some of our clients, Orion's PEEK printed parts achieved even higher crystallinity than injection molded parts!

Fig.n°2 -The arrangement of molecules in amorphous and crystalline polymers

The advantage of our techniques is that it’s not just limited to PEEK. The tendency to deform (warp) a lot during cooling is a well-known problem with other materials such as ABS. This is caused by the high degree of shrinkage that occurs when it cools, with sections of different thickness cooling at uneven rates. This results in internal stresses and warping. Due to the deformation more often than not the mating surfaces, where separate components of a product meet, are not exactly the shape they should be, resulting in a lower-quality or even faulty end product.

One of the aims of our technology is to keep parts from cooling too quickly. We’ve also applied this to ABS parts for one of our customers. Normally, they would have to post-process these parts to ensure that the plexiglass top surface would create an air-tight seal with the printed part; using our printers, this need has been eliminated as the part comes out as intended. 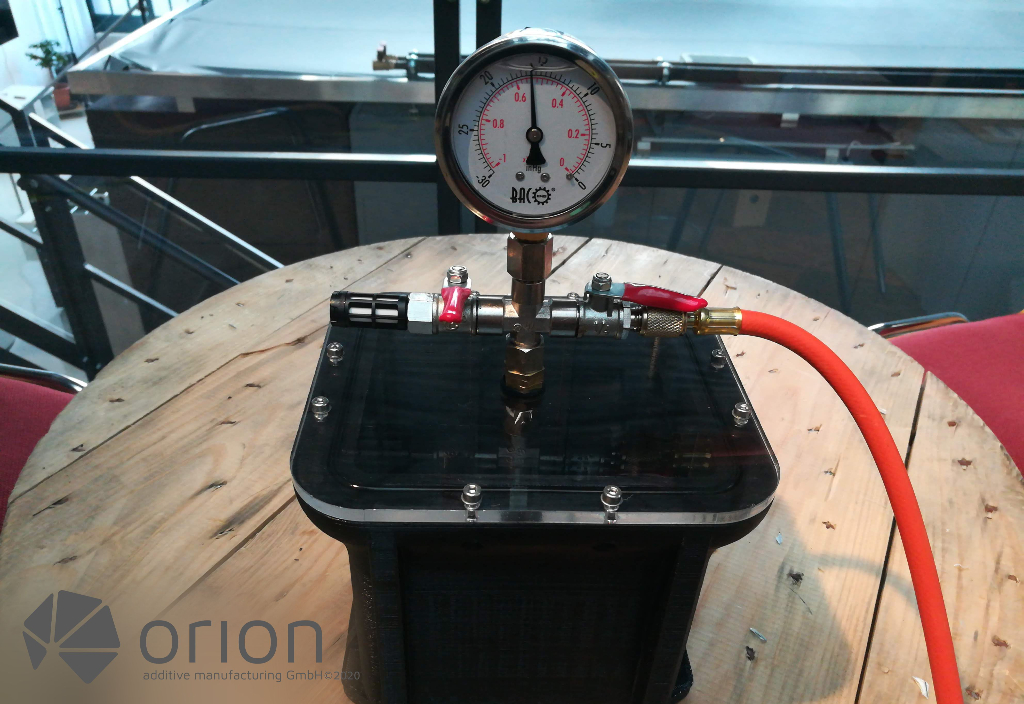 Fig.n°3 - The printed part forms an air-tight seal with the plexiglass sheet.

We use cookies to provide you a better user experience.